This Week in Dragon Athletics 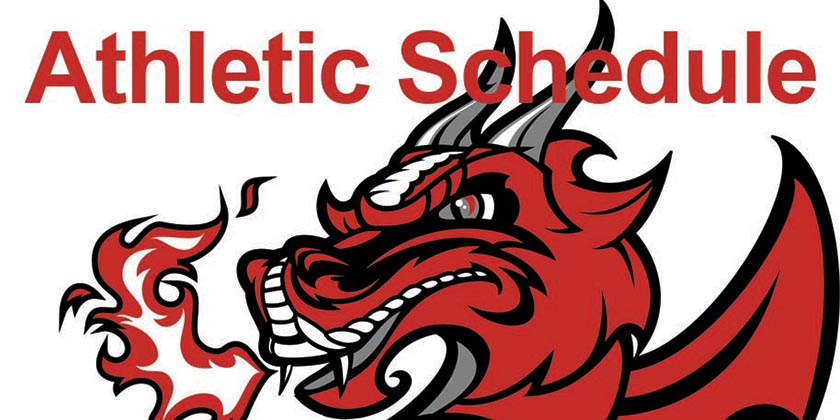 Saint George's JV and varsity basketball teams are on the road this week, playing in Davenport on Jan. 4, in Spangle (Upper Columbia Academy) on Jan. 6, and in far off Okanogan on Jan. 8.  See the week's full Athletic Schedule for times and locations.  Go Dragons! 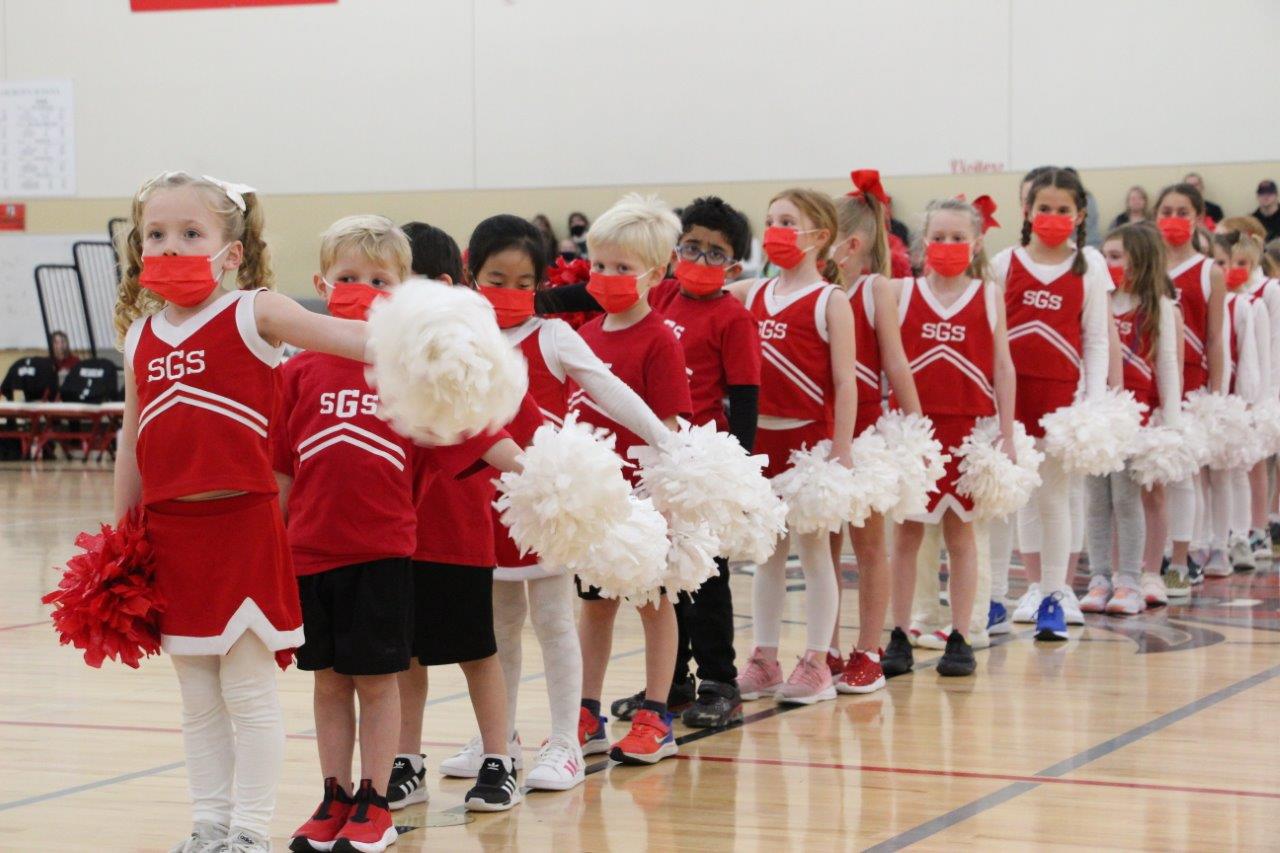 The Lower School cheerleaders performed at half-time of the boys and girls varsity basketball games on Friday, Dec. 17.  See a Photo Gallery of them in action, cheering on the Dragon teams. 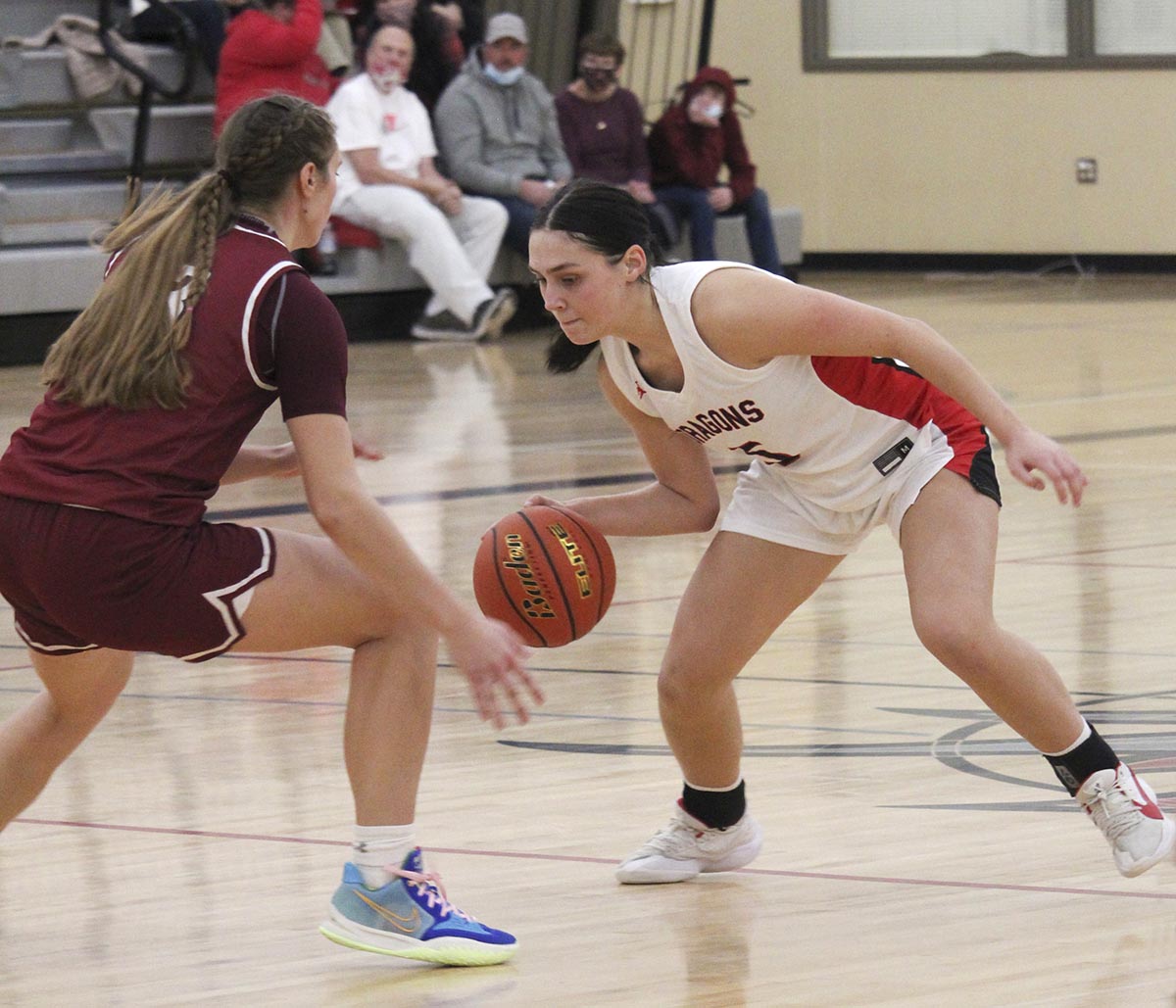 The Dragons hosted Colville in the Schmidt Center Gym on Friday, Dec. 17.  See photo galleries of the Girls Varsity Game and the Boys Varsity Game in their contests at the start of the holiday break. 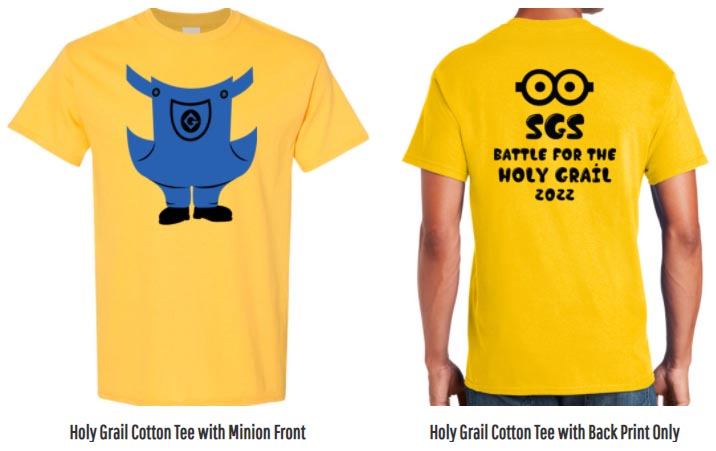 The Battle for the Holy Grail spirit game is scheduled for Thursday, January 27 at Northwest Christian HS.  This year, our ASB leaders choose the theme “Minions” (from the movie Despicable Me) and have already begun the planning process for what that will look like.  We will be putting together spirit packs for Upper School students, and all members of the SGS community have the opportunity to order our themed T-shirts for the event.  There are two t-shirt options this year -- one with the Minion figure on the front and the other has a plain yellow front if you are interested in wearing your own overalls!

For those interested in ordering shirts, please use the following link: Holy Grail T-Shirt Online Store.  The online store will close at midnight on Monday, Jan. 10, so get your orders in early! 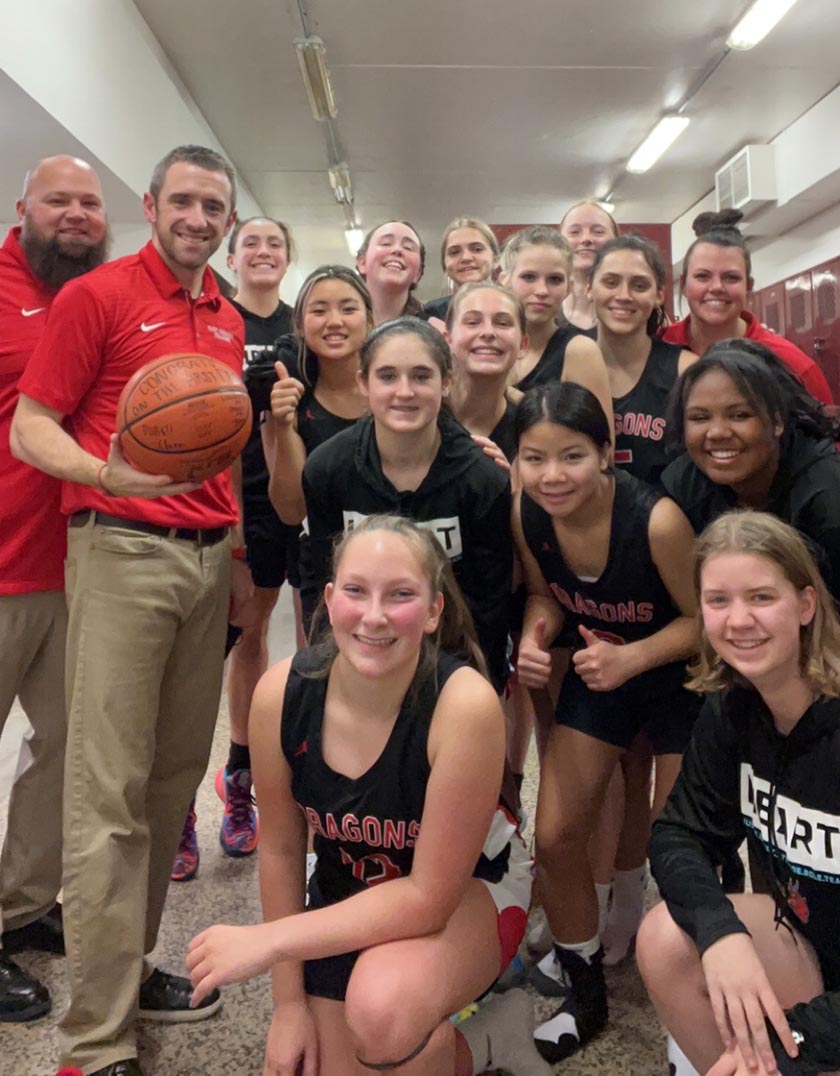 The girls varsity basketball team earned their first win of the season on Friday, Dec. 10.  The Dragons forced 51 turnovers, beating Newport 52-9.  Margreit Galow had 24 points and Anni Bergquist added 10 more.  Henri Osborne had 7 rebounds and 5 points in the win as well.  It was also Brad Kirsch's first win as head coach of the girls team.  The photo above was taken in the locker room after the win.  Go Dragons! 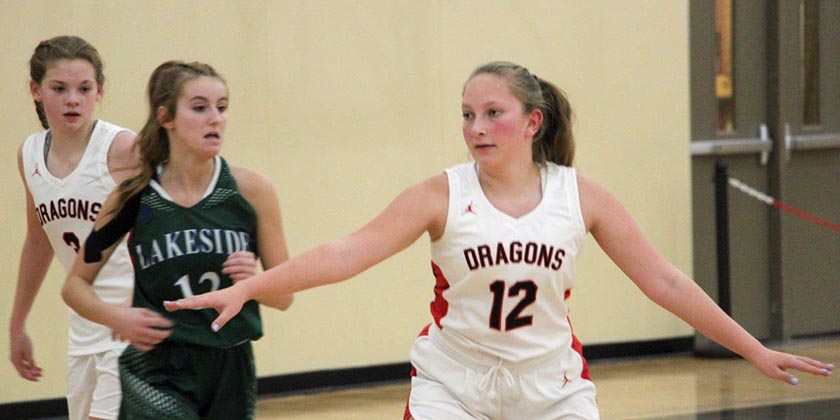 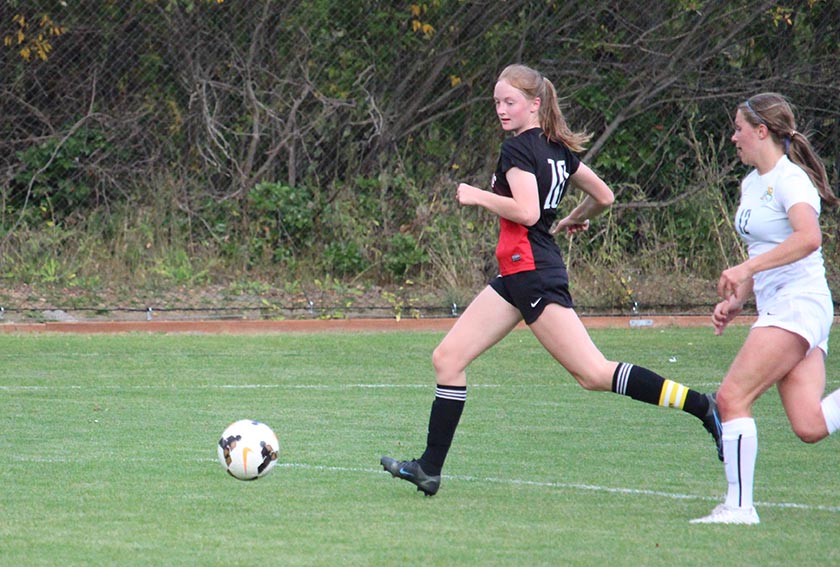 Margreit Galow was named MVP for Girls Soccer by the Northeast 2B League for this fall.  She was joined by fellow Dragons Maggie Morris, Savvy Briceno, and goalkeeper Henri Osborne on the League's First Team.  Reagan Thomas also earned Honorable Mention.  Congratulations, Dragons! 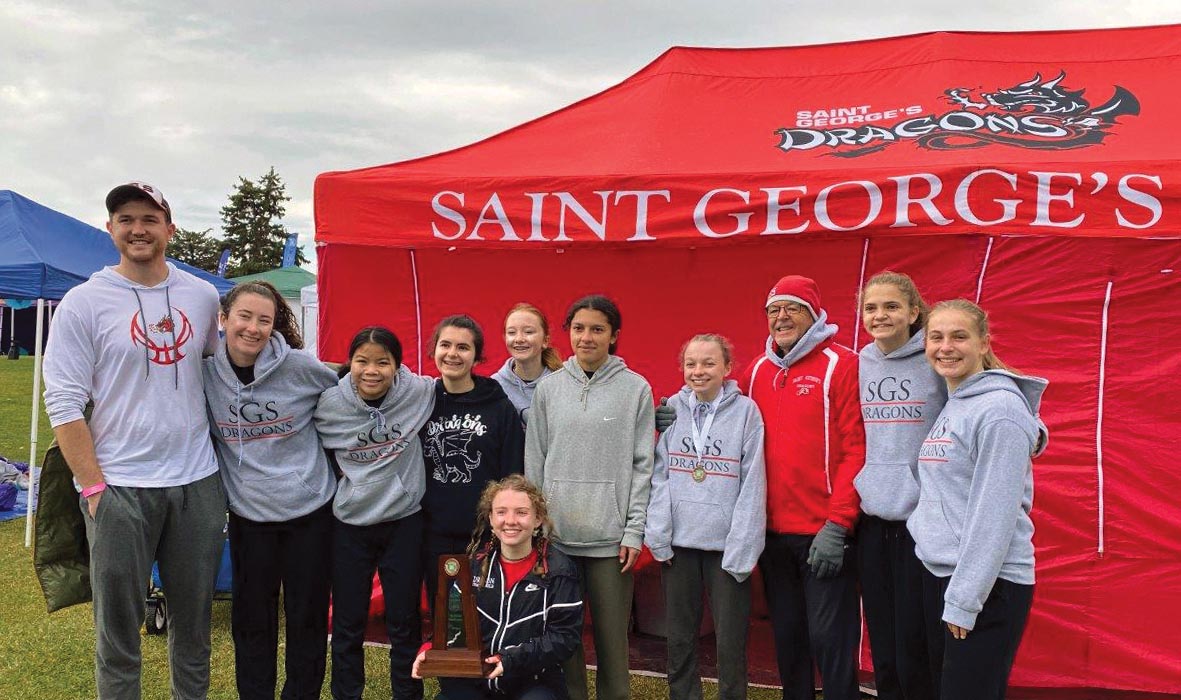 Saint George's girls cross country team, who finished 3rd at the State Championships, added another trophy for their hard work in the classroom.  They are the Fall 2021 2B State Academic Champions!  The nine runners earned an average grade point of 3.93 for the highest GPA of any 2B girls team in the state.  Go Dragons!

The Middle School girls volleyball team played Reardan in Metters Gym last month.  Here is a Photo Gallery of them serving, volleying, and getting a win! 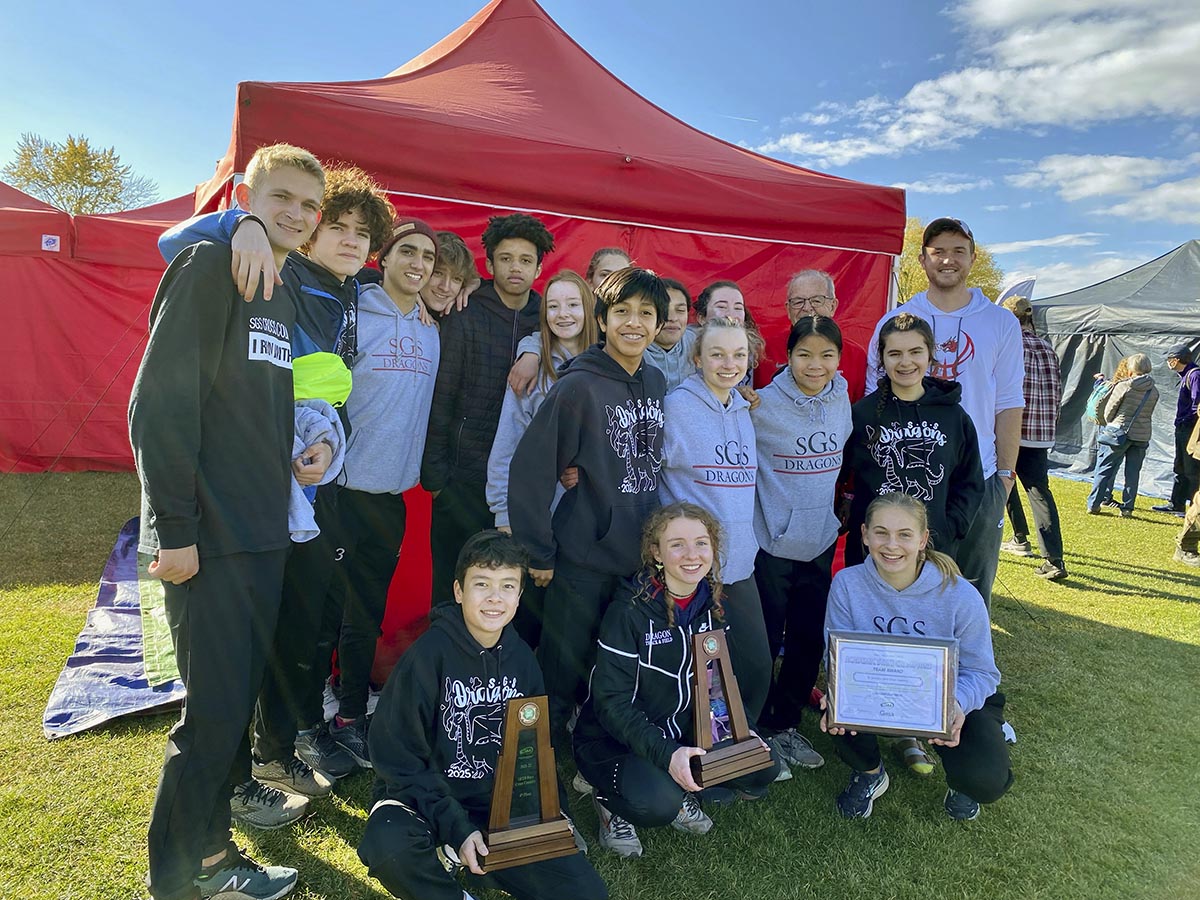 The Dragon cross country teams finished strong at the State 1B/2B Championships on Nov. 6 in Pasco, with the boys placing 4th overall and the girls earning the 3rd place trophy.

The boys were paced by Shawn Jones, who was 13th overall with a time of 17:28.2 on the 5,000 meter course.  He was followed by Hrair Garabedian (30th), Finn Horsted (34th), Ben Morales (39th), Joaquin Kiltz (55th), Oliver Ling (75th), and Nelson Steele (89th).  The girls fastest runner was Josie McLaughlin, who placed 4th overall in a time of 19:59.7.  She was followed by Maggie McLaughlin (19th), Georgia Steele (29th), Kala Reaves (36th), Esther Buckner (48th), Clara Witmer (55th), and Lauren West (70th).  See a Photo Gallery of images from the State Championships provided by Jayne McLaughlin, and view the final results for the Boys State Race and the Girls State Race.  With both Shawn and Josie just 9th graders, and Maggie as the only senior on the two teams, the Dragons are set for even better results next year!  Go Dragons!